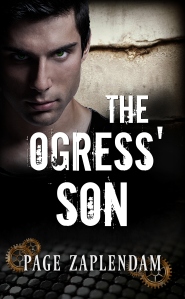 An apocalyptic level scientific overreach catastrophe reversed the poles, killed off 97% of the world’s population, and caused inheritable genetic anomalies in some of the few who survived.

Those with flawed genes, the Unearthly, are pariahs, science and technology is regulated by a despotic king, lawlessness has given way to local fiefdoms, and a new dark age has arisen, explaining what were once scientific facts as legend, lore, and myth.

Slade lives a quiet life in the Iron Wood, hunting alongside his mother and visiting the village only to trade goods. But when she’s assassinated, he goes out into the dreaded human world to find her killer. Human he might be, but as the son of the Ogress, he is unafraid of rebels, Syndicate crime lords, or ruthless nobles who would love nothing more than to see him dead.

Available from other retailers