I should preface this by saying that it’s my problem with vampires. 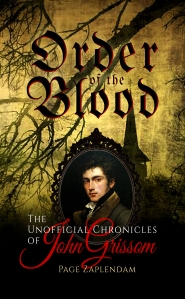 The vampire narrative is well-known to most of Western society. An evil vampire, born of (narrative of choice), goes around killing or turning other men into vampires. These other vampires must kill other people in order to survive themselves. They burn in the sun, with exposure to Holy Water, Crucifixes, and silver, and love to sleep in coffins.

But it never sat well with me that a guy could be going around doing his daily, normal business, and then two days later, he’s feasting on other people. What happened to free will? What happened to choosing no? In what other circumstances do we have such a complete and total loss of our own will? Other than prison, I can’t think of any. Maybe I’m just not imaginative enough.

Can you imagine being a Catholic, and all of a sudden, through no fault or desire of your own, you can’t even enter a Church?

And for me, that’s where the vampire narrative falls apart.

That being said, I love the idea of vampires – tortured souls that live until they are killed, watching the centuries pass and knowing they are incapable of living a normal life ever again. I feel like (and have always felt like), their struggle could be made so much more than what it is if they weren’t automatically written off as evil.

Here’s my other problem with vampires. I’m a realist. In case you’re scratching your head, bear with me.

In order for me to write something I have to understand it. I can see a movie about vampires and find the suspense entertaining, but the rest of it I roll my eyes at and point out (to myself or to the other unfortunates watching it with me) all the reasons why this whole scenario doesn’t stand up to reality.

Maybe you’re wondering why in the world I would bother writing spec fic about vampires then? The answer: I love it. I love the idea of vampires, et al. But I love them with realistic reasons for their existence. I especially love where I’ve gone with Order of the Blood. It’s a realistic take on vampires. No sparkles, no sudden loss of free will, no overly-dramatic dialogue. Vampires as real people that have to learn how to cope with their new life. Without killing anyone.

So even though I have all these hang ups about writing vampire spec fic., I will continue writing it.

If you want to see what inspires me, check out my pinterest boards!