I was trying to think how to describe my Van Helsing Sr. character (the grandfather of the original Van Helsing from Bram Stoker’s Dracula). He’s a Prussian ex-patriate who has left the fatherland due to Napoleon taking over Europe. He was originally employed by the Prussian government to hunt vampires and investigate paranormal activity, but he now works for the British crown performing the same functions. He has his own backstory that I will eventually turn into a full length novel or a spacer novella between books in the series.

In Order of the Blood, I wanted him to be rugged and tough, masculine without the macho, hardened but still humorous. So as a descriptor I’ve settled on a cross between Val Kilmer in Ghost in the Darkness and the Headless Horeseman from Sleepy Hollow… only Van Helsing has a head… and doesn’t wear a uniform, or randomly kill people. Well, he kills vampires.

But when it comes to rugged hunkiness and unparalled killing machine, young Val Kilmer and headless horseman pretty much encapsulate him. 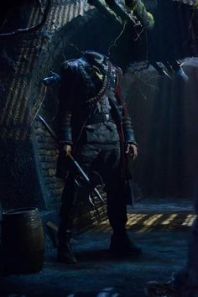